In this episode of The Italian American Podcast, we are changing it up. I will be taking you on a trip with me and we will be heading to the black hills of South Dakota to attend a ceremony where Luigi del Bianco will be named the Chief Carver of the Mount Rushmore National Memorial.

We will also speak with Lou Del Bianco about the role he played in helping to pursue this recognition for his grandfather. We will then attend Lou Del Bianco’s performance where he will dress up like his grandfather and put on a play at the memorial, and then immediately after that we’ll attend the official ceremony and hear from some of the speakers including Gloria Del Bianco, Luigi’s daughter.

In the Stories Segment of the episode, we’ll reflect with Lou, the day after the ceremony about his 30-year journey of dedication and perseverance to garner this rightful place in history for his grandfather Luigi Del Bianco.

“He is worth any three men I could find in America, for this particular type of work.” – Gutzon Borglum, Designer of Mount Rushmore 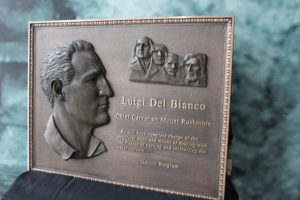 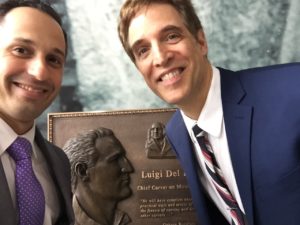 Lou’s dramatic approach to storytelling “puts pow into passivity!” The Parents Choice foundation states that “few performers excel as both storyteller and musician, but Lou Del Bianco is one who does.”

Lou Del Bianco has been working with children of all ages since 1982. According to the New York Times,

Lou has performed all over the country, from the Tastes of Chicago to the Kravis Center to Carnegie Hall. His music video, “A Little Bit Clumsy”, is presently playing on the Learning Channel.

Lou’s portrayal of Abraham Lincoln has been endorsed by the Lincoln Bicentennial Commission. His grandfather, Luigi, chief carver on Mount Rushmore was recently honored by TLC’s CAKE BOSS with a remarkable lifelike cake of the American icon. Lou’s one-man show about his grandfather has received rave reviews from schools, libraries, and historical groups.

IAP 23: Finding relatives in Italy and connecting the Italian and American sides of your family
Feast of the Seven Fishes
CBS News – Mount Rushmore’s chief carver gets his due

Previous Post: « An Italian American Family who is on the path to inspire many more people than they know
Next Post: An Open Thank You Letter to Leonard Riggio and Barnes & Noble »