Click here for a complete archive of The Italian American Podcast 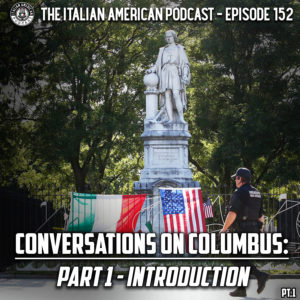 In this episode, we’re setting out to tackle an issue that has been at the forefront of conversations surrounding the Italian American identity in the 21st Century. This issue is one that hits at the heart of our national mythology for Americans of all ethnicities — the life and legacy of Christopher Columbus.

Many of our listeners have called for us to weigh in on this highly-charged issue, and so we’ve set out to replace debate with dialogue and undertake a journey into the historical record of Columbus’ life, legacy, and relationship with the Italian American community.

Over the course of many upcoming episodes, we will address a number of topics around the evolving issue with experts from various fields and perspectives, both from within the Italian American community and from without.

In today’s introduction to that effort, moderator John Viola will take you through the way in which we developed our questions, some of the voices we are seeking to include in the conversation, and what we’d like to understand and share with our listeners at the end of this exercise.

With such an important discussion to be had, for our community and for the United States overall, this is an introduction you’ll need to hear at the very beginning.

Episode 2: Straight from the Source 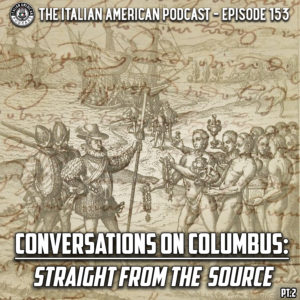 In this episode, we’re picking up with Part Two of our “Conversations on Columbus” series exploring the life and legacy of Christopher Columbus and we’re starting right from the beginning!

As we set out to find truth in the current debates around the famed Genovese navigator, we’re seeking to understand just what primary historical documentation exists to provide insights into Columbus’s life, his deeds and, ultimately, his character.  Like any good history quest, we’re beginning with source materials.

Co-host John M. Viola will share portions of the dozens of interviews he’s already conducted on Columbus as he seeks to understand the various documents at the root of the conversation.  He’s joined by various academics and one impassioned student of history as they explore exactly what exists, where the documents are, and how even the most authentic of historical sources is open for interpretation.

If you’ve decided to join us on this journey of exploration, you can’t afford to miss this important episode that dives right to the heart of how we know Christopher Columbus! 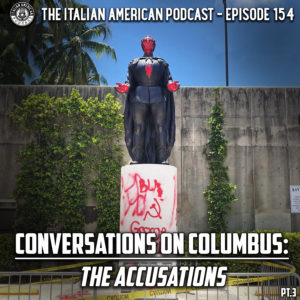 In this episode, we examine the major accusations which Columbus’ critics charge him with.

We’ll begin with an examination of when and how Columbus’ reputation began to suffer, and just what caused a figure that was once considered essential to the American sense of identity to fall so far, so fast.

From there, co-host John M. Viola will present segments from the dozens of interviews he’s conducted on Columbus as he seeks to understand the major arguments being made by those who are seeking to remove Columbus from the national pantheon of heroes.

These various academics will address issues around the term “Discovery of America,” Columbus’ performance as both a sailor and a public servant, and the most concerning allegations concerning the legacies of slavery and displacement in American history.

If this series is, in essence, a virtual hearing, this week’s episode represents the plaintiff’s case… after all, the side bringing the case is the side that bears the burden of proof, and thus always goes first!

If you’ve decided to join us on this journey of exploration, you won’t want to miss this essential episode! 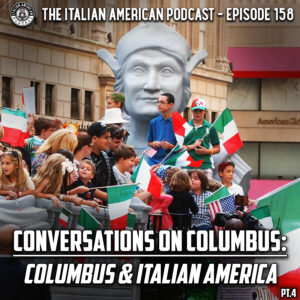 Part four of our “Conversations on Columbus” series exploring the life and legacy of Christopher Columbus examines the long and complex relationship between the Italian American community and the Genovese navigator who has become a symbol of Italian American pride.

We’ll begin with an exploration of the history of Columbus Day in the United States. We’re joined by Professor Bill Connell, co-editor of The Routledge History of Italian Americans, to explore what Columbus and the holiday bearing his name have meant to many different American communities, not the least of which is our own.  We’ll attempt to untangle the complications of what Columbus Day’s designation as a federal holiday means for Italian Americans fighting to preserve it, and for those seeking to change it as well.

We’ll also speak to one of those Italian Americans seeking to move the community away from Columbus Day when we’re joined by Professor Steven Cerulli of Hostos College, who has been leading an effort to replace the statue of Columbus in his hometown of Stamford, Connecticut.

If you want to understand the complicated situation surrounding Columbus, we’ll have to separate the “general American” from the “Italian American” perspectives, and you won’t want to miss this episode seeking to do just that! 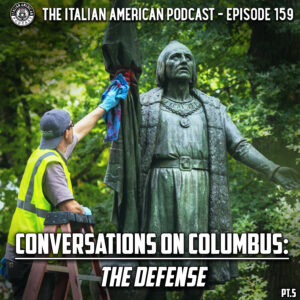 Happy Italian American Heritage Month, Paesani!  We’re kicking off our favorite month of the year by bringing you Part Five of our “Conversations on Columbus” series exploring the life and legacy of Christopher Columbus.  This week we’re presenting the voices who’ve set out to defend the legacy of this complex Italian figure.

We’ll begin by running down the charges established in Part Three of our series, and then turn to a myriad of diverse voices who are calling for a reassessment of the anti-Columbus sentiment that has developed in recent decades.

And we’ll speak to some who believe the charges against Columbus are patently false, others who maintain Columbus deserves to be examined in the context of his own times, and some who see an ideologically driven witch hunt at the root of recent allegations against this once universally heralded navigator.

In our quest to discover as much historical truth as possible, we’ve already given time to the detractors, so now sit down and join us for the view from the other side, as our panel of guests makes the case for Columbus the Hero! 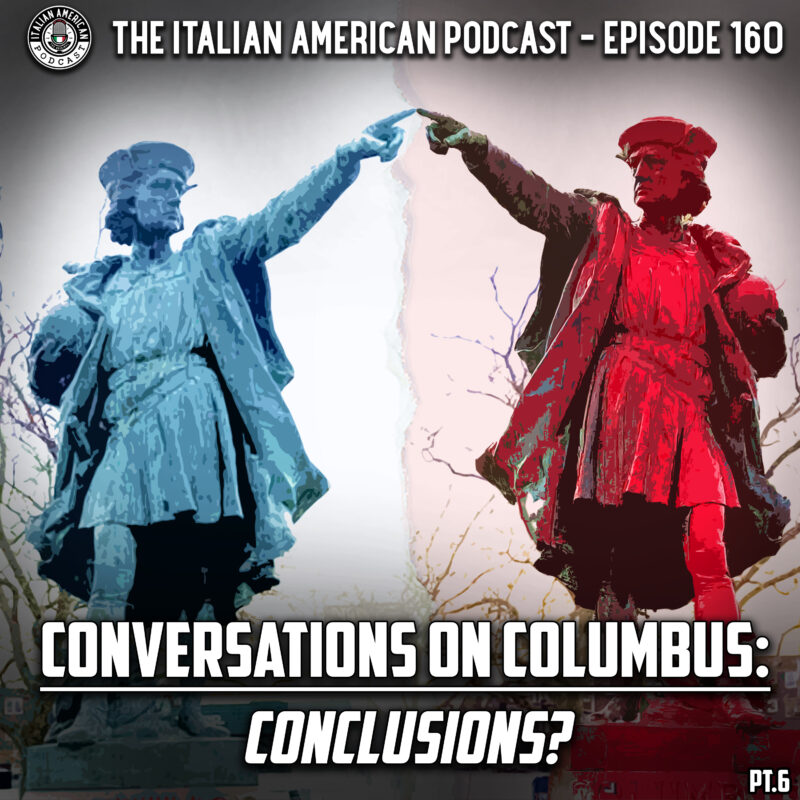 Happy Columbus Day, everybody!  That is, if you’re one of the folks who still celebrates Columbus Day because, appropriate to today’s often contentious designation, we’re presenting the sixth and final segment of our “Conversations on Columbus” series exploring the life and legacy of Christopher Columbus!

This week is our attempt to tie a nice big red-white-and-green ribbon around this complex discussion by bringing you the conclusions that host John Viola has drawn over the course of these six episodes and dozens of hours of interviews, research and contemplation around Columbus and his future in the American popular consciousness.

We’ll examine what the debate around Columbus is really about… the man, the myth or the moment in time — the Columbian Exchange, and how each of those facets to this complicated issue warrants a unique and patient exploration.

If you’ve joined us for all five previous episodes, or if you’re finding us for the first time,  we can certainly promise you an episode — and a series — that will leave you looking at Columbus and Columbus Day far more closely than before! 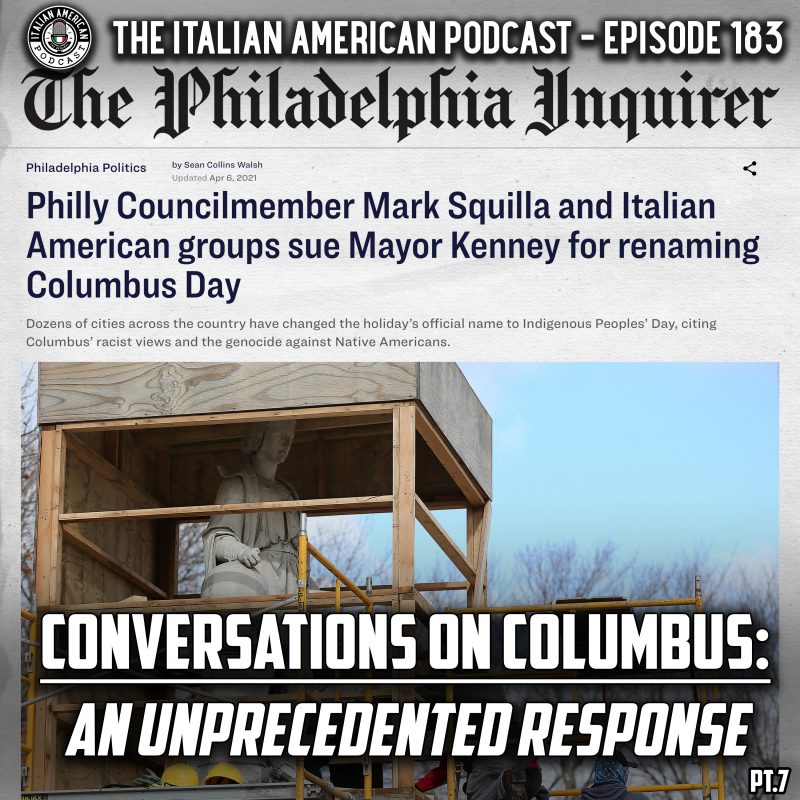 On Tuesday, April 6, 2021, Philadelphia Councilmember Mark F. Squilla, The 1492 Society, and the Conference of Presidents of Major Italian American Organizations all joined forces to file a lawsuit in the United States District Court, Eastern District of Pennsylvania against Philadelphia Mayor James Kenney’s Executive Order No. 2-21, with which he unilaterally cancelled Columbus Day as a holiday in the City of Brotherly Love and replaced it with “Indigenous Peoples Day.”
This week, host John M. Viola sits down with Atty. George Bochetto, who is representing the plaintiffs in this landmark case.
The plaintiffs contend that no notice was given to the other branches of the Philadelphia municipal government, which had a right to designate holidays, no input from the public was requested or allowed for, and no deference was given to Pennsylvania State Statue (44 P.S Section 32) declaring “Columbus Day” as an official statewide holiday, all in violation of the Philadelphia Home Rule Charter.
Moreover, Atty. Bochetto and his clients believe that Mayor Kenney’s executive order is the latest in a long pattern of discrimination against the Italian American Community in Philadelphia, and that his actions violate the U.S. Constitution’s guarantee of “Equal Protection” against governmental discrimination as cited in the 14th Amendment.
In a continuation of our “Conversations on Columbus” series, we’ll delve into what inspired this unprecedented suit, explore the legal process that is about to unfold, learn how this case could potentially arrive at the United States Supreme Court, and what its result could mean for the Italian American community — and for communities of all backgrounds — in future efforts to define ethnicity and identity in an increasingly diverse America.
Join us for this very special addition to our “Conversations on Columbus” series as we unpack what promises to be a historic lawsuit for the Italian American community.