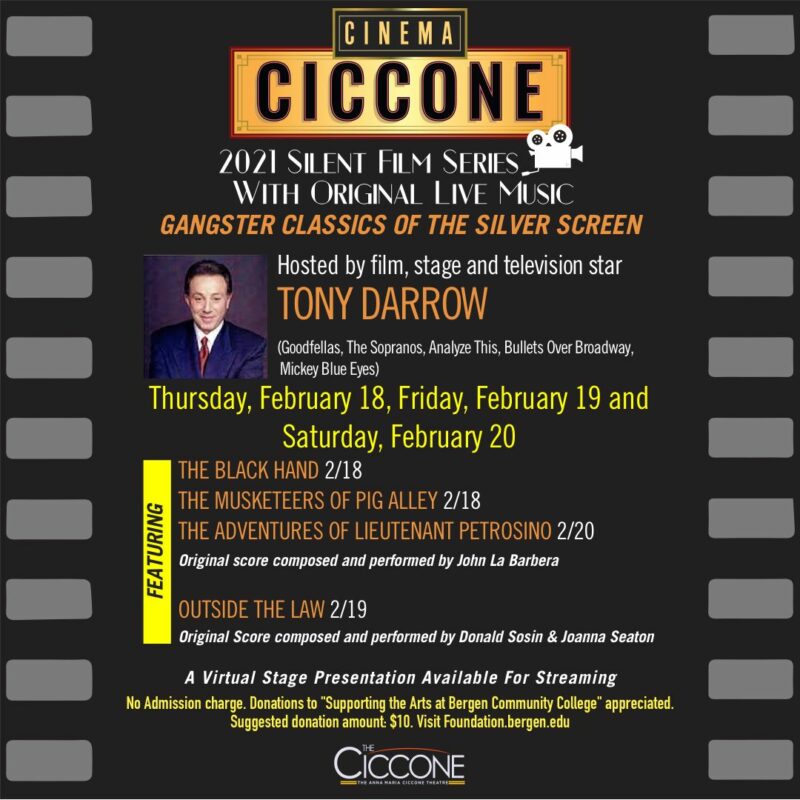 The Italian American Podcast is proud to support Bergen Community College as it continues its “Cinema Ciccone” silent film series this month with four unique films, all designed to celebrate this nearly 100-year-old art.

Due to the COVID-19 pandemic, this year’s series will run virtually with a complimentary “Gangster Classics of the Silver Screen” series hosted by film, stage and television star Tony Darrow, of Goodfellas and The Sopranos. Mr. Darrow will introduce each film and moderate discussions with the composer/performers before each screening. The films will also include live music accompaniment by Donald Sosin and Joanna Seaton and Academy Award-nominated film score composer John La Barbera.

“Silent film is a unique art form that allows the viewer to experience moving images without the interference of speech,” Mr. Sosin said. “The flicker of the slow speed of silent film projection coupled with appropriate music can create a dreamlike state in the mind. The best preserved and restored silent films are also a gateway to a time when (slapstick chases notwithstanding) life went on at a gentler pace, clothing was more elaborate, and civilization was in some ways more orderly and routine.”

Featuring “The Black Hand” and “The Musketeers of Pig Alley” Thursday, Feb. 18, “Outside the Law” Friday, Feb. 19, and “The Adventures of Lieutenant Petrosino” Saturday, Feb. 20, the films begin at 7 p.m. through a virtual stage presentation offered by the College’s Anna Maria Ciccone Theatre.

“The greatest silents are superb works of art that have endured for a century or more and easily rank with the best of contemporary films,” Mr. Sosin continued. “It has been my joy to work in this small niche of the film industry for 50 years, composing and performing for thousands of titles. I look forward to being able to resume live performances again as soon as theaters like the beautiful Ciccone are back in operation.  In the meantime, we are delighted to have the chance to present our score for ‘Outside the Law’ as part of this week’s festival of gangster films at Bergen Community College.”

Each silent film brings its own unique plot to this year’s series:

“It is a privilege to present, for our students and the Bergen Community, these early classic silent films,” said Peter LeDonne, director of community and cultural affairs, Bergen Community College. “They helped create the motion picture industry and became the touchstone for generations of great filmmakers to come. Audiences around the world pay them tribute every time they watch a movie.”

While complimentary to patrons of the Ciccone Theatre, a suggested donation of $10 to foundation.bergen.edu helps support the arts at Bergen. To register and sign up for the Ciccone Theatre email list, visit bergen.edu/silentfilm. Following the event, all films can be viewed at the above hyperlinks.