It’s Valentine’s Day and love is in the air– especially on the bridges of Italy.

Visitors to Italy may have seen “lucchetti d’amore” (love locks) placed on bridges and lampposts in cities such as Rome, Florence, Bologna, and Turin. The locks, meant to symbolize eternal love, are placed on the bridges by couples, who then toss the key into the water below.

The tradition originally began as a promise from soldiers who were on their way to war. The soldiers would leave the locks on the road leading out of their respective hometowns as a promise to return. According to Andrea McDonald of EuropeUpClose.com, the trend turned romantic and spread throughout the country in 2006, when the film “Ho Voglia di Te,” based on the novel by Federico Moccia, showed a young couple writing their names on a padlock attached to a lamppost with a chain. Popular legend states that if both members of the couple are not present as the lock closes, the love has been jinxed forever. 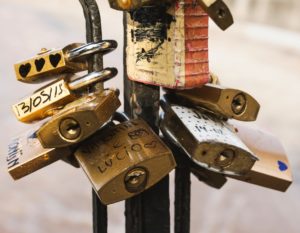 The first bridge to become locked down with the love locks was the Ponte Milvio in Rome, which was build in 206 B.C. to commemorate Rome’s victory over Carthage. It was also the place where Constantine had a vision of God that led to victory over his rivals, the result of which was the declaration that Christianity was the official religion of the Roman Empire.

Teenagers and tourists would visit the bridge to declare undying love and nearby street vendors began selling padlocks for five Euros each. At one point, the Tiber River was having as much metal thrown into it as the Trevi Fountain. When the lamppost buckled under the weight, people began to place their locks on the bridge itself. After only a year, the bridge also began to weaken under the pressure.

In response, Roman officials decided to remove the locks and display them at City Hall, then they installed six new steel posts where the original lamppost once stood, surrounded by chains for people to hang their padlocks.

Officials in Florence weren’t as welcoming—in 2006, they removed 6,000 locks from the city’s Ponte Vecchio. The police there issue fines of 50 Euros to couples who attempt to place a lock on the bridge.

Today, the love locks can be found all over the world, each one with their own special story of forever love.