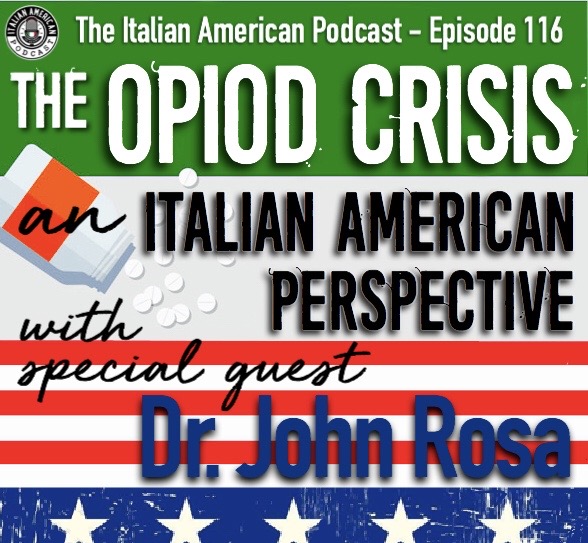 The United States population is equivalent to 4.27% of the total world population, yet we consume 90% of the opioids on earth.  Every single day we lose 150 Americans to opioid related deaths.  It’s an epidemic that is ravishing our nation, and one that is little understood.
This week, moderator John M. Viola sits down with longtime friend Dr. John Rosa, the founder of ‘Overdose Free America‘, a leading voice in integrative medicine and a surrogate to the White House Opioid Task Force, who will explain both the terrifying scale of this crisis, and his Italian American approach to tackling it.
They’ll explore the evolutionary tendencies at the heart of opioid addiction, and the long and checkered history of opioids, big pharma, and how these drugs have become the number one cause of death for Americans under the age of fifty.
With 650,000 opioid prescriptions being written a day, and hundreds of billions of dollars spent on advertising and lobbying annually, ending this plague often looks like a battle against insurmountable odds… but could the answer lie with the Italian American perspective on family?
This is an episode destined to open eyes and ears to a cataclysmic national emergency, and one that might just change the way you see this grave issue.
Previous Post: « IAP 115 : “Pizza Shop: An Italian-American Dream” An Interview With Filmmaker Antony Osso
Next Post: IAP 117 : “Hey, I Grew Up This Freaky Way Too…Let’s Laugh About It” A Conversation with “Rocco the Comic” »