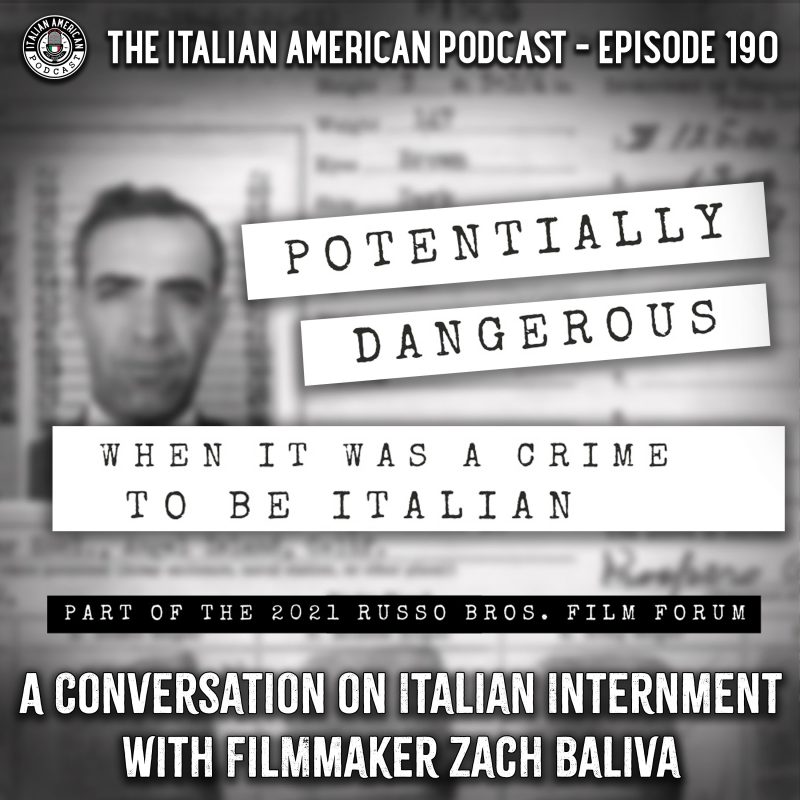 In the United States of America, it was once a crime to be Italian.

That’s what filmmaker Zach Baliva, director of the forthcoming documentary, “Potentially Dangerous,” reveals to our listeners in this all-new episode of The Italian American Podcast!

As America crept closer to its second World War, the government grew suspicious of some citizens based not on what they had done, but on where they were from, registering more than 600,000 Italians and Italian Americans as “Enemy Aliens.” Many were under curfew from 8 p.m. to 6 a.m., and more than 10,000 individuals were forced from their homes and businesses. Hundreds were placed in military camps without trial.

Zach recounts how he discovered the stories he shares in this documentary, which is one of the participants in the Russo Brothers Italian American Film Forum, an annual event created by Hollywood directors Joe and Anthony Russo (Captain America: Civil War, Avengers: Endgame) in partnership with the National Italian American Foundation and the Italian Sons and Daughters of America to support projects that highlight the Italian American experience.

But this is, after all, the Italian American Podcast, so we will get into a heated debate about this often under-studied period in Italian American history, and question whether the story of Italian internment was purely misguided overreaction, or if there might be a more complicated origin to this sordid tale.

Be sure to listen to this episode filled with passionate discourse and intimate stories of a chapter of Italian American history that is not often discussed!

To support the “Potentially Dangerous” Kickstarter campaign to assist with funding for this project, visit: