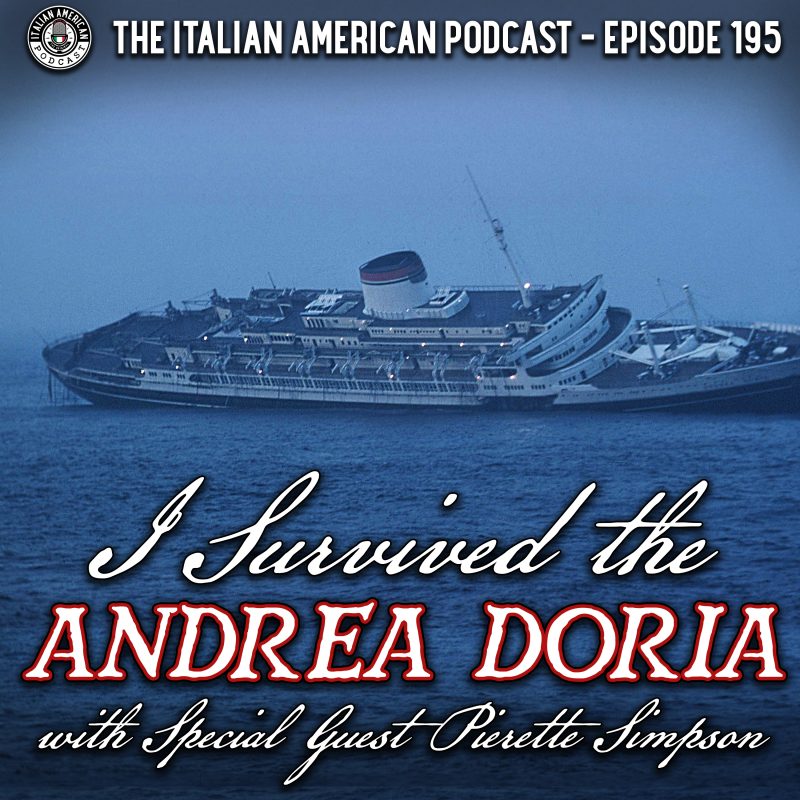 Nearly 65 years ago, on the night of July 25, 1956, the SS Andrea Doria, the pride of the Italian Line and a symbol of Italy’s burgeoning post-war recovery, approached the coast of Nantucket, Massachusetts at the end of a foggy eighth day of a nine-day voyage to America.

Suddenly, a passage that had been called the “Sunny Southern Route” turned into a nightmare for 1,706 passengers and crew aboard the “Museum on the Waves” as the Andrea Doria collided with the MS Stockholm, claiming 46 souls in one of the worst maritime disasters to occur in the United States waters.

Amongst the survivors of that tragic night, Pierette Domenica Simpson, has made it her mission to tell the true story of the Andrea Doria. In this week’s episode, she shares riveting first-person testimony about that fateful night when she, along with many other Italian immigrants, unknowingly became part of history. Pierette will tell us about her family’s life in Italy, as well as what led her family to decide to leave their homeland for a new life in America.

She’ll also share her recollections about how, when it was struck in the side, the Andrea Doria began to shift so heavily to starboard that it rendered half of its lifeboats unusable and how the ship stayed afloat for more than 11 hours after its collision. She will also recall the lives lost and several miracles that took place that night.

We will also learn about Pierette’s passion for storytelling and how she has used that to help correct historic records of the sinking, including in her book, “Alive on the Andrea Doria,” and in a docufilm, “Andrea Doria: Are the Passengers Saved?” Podcast listeners in the New York Metro area can watch the docufilm, on Sunday, July 25, at 3 p.m. EST or on Monday, July 26, at either 6 a.m., noon, or 10 p.m. EST on CUNY Television. The trailer for the docufilm can be seen by clicking here.

For more information about Pierette and her works, visit www.pierettesimpson.com.