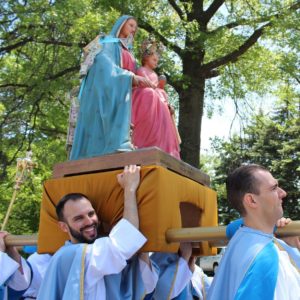 Italian American feast season is about to begin throughout the United States and members of the Society of Our Lady of Sacro Monte of Novi Velia in New Jersey have decided that Coronavirus won’t stop their centuries-old tradition.

The triduum and feast of Our Lady of Sacro Monte of Novi Velia will be livestreamed on the society’s Facebook page, as well as on the Facebook page of the Our Lady of Mount Carmel Church of Newark, New Jersey. The feast program will begin at 8 p.m. on Thursday, May 14, with a Novena. The Novena will also be held at 8 p.m. on Friday, May 15. A Vigil Mass will be held on Saturday, May 16, at 7 p.m., and on Sunday, May 17, a festival Mass with Panegyric will be held at 11 a.m. Immediately following the festival Mass will be a virtual celebratory gathering on the Catholic Society of Our Lady of Sacro Monte of Novi Velia’s Facebook page.

The miraculous image of Our Lady of Sacro Monte of Novi Velia, crowned by pontifical decree in 1889, rests atop Mount Gelbison in the town of Novi Velia in the Cilento region of the Province of Salerno, Italy. Mount Gelbison which soars 5,594 ft above sea level, was most probably first used as a place of religious worship by the ancient Oenotrian peoples of Southern Italy and later by the ancient Greeks who colonized the Cilento area in the centuries before Christ, and constructed a temple atop the mountain dedicated to the goddess Hera. With the dawn of Christianity and the embrace of the salvific Gospel of Our Lord Jesus Christ by the people of the Cilento, a shrine to the Blessed Virgin Mary was built upon the ruins of the former pagan temple which was eventually maintained by Greek monks fleeing the ravages of the Iconoclast heresy.

Devotion to the Virgin Mary is so strong in the Cilento and her sanctuaries are so numerous that the region has become known as, “La Terra di Maria” or “The Land of Mary”. The shrine at Novi Velia is continuously besieged by pilgrims from its opening on the last Sunday of May until its closing for the winter on the last Sunday in October.

From the time of the shrine’s foundation until the 1950s, residents of the Cilento as well from the surrounding area would travel annually on foot as an act of penance to visit the sanctuary. Arrival at the shrine and the return trip home took many days. The pilgrims would walk by day carrying banners and singing hymns in the Cilentano dialect dedicated specifically to the Blessed Lady of Sacro Monte. These hymns were varied and often particular to the hometowns of the pilgrims. Many women would carry on their heads tall “cinte” or candle houses as votive offerings to the Virgin.

The candle houses would be constructed by creating immense towers of one hundred or so beeswax candles decorated with flowers and ribbons, regaled with images of saints, often the patron of the town as well as the Madonna del Sacro Monte. After days of carrying the candle houses atop their heads, these votive offerings, often as acts of thanksgiving for favors received, would be left at the shrine by the female pilgrims so that the candles could be used to light the sanctuary in the days before electricity. 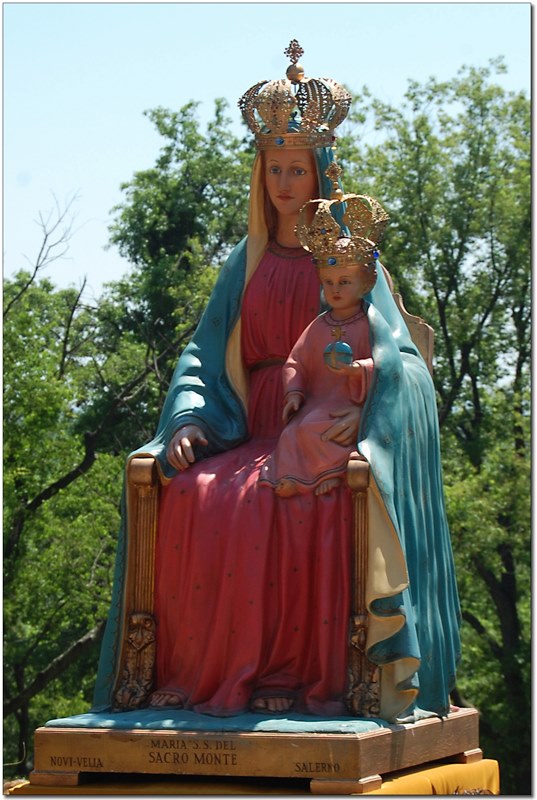 At night, in those times of unimaginable hardship and poverty, large groups of pilgrims would camp in the fields or on the streets of the villages and towns that lined the pilgrimage routes. The singing would continue as it had during the day, men and boys playing the zampogna and organetto to accompany the traditional Sacro Monte pilgrimage hymns. The zampogna is an Italian bagpipe, an ancient instrument of the area, the origin of which predates recorded history. It is made from goat skins by shepherds, the Cilento breed of goat being profuse in the area and famed for the cheese made from its milk. Cheese, dried sausage, soppressata and the rustic whole grain bread unique to the area would be the meal for the journeying pilgrims, the food having been carried through the trip in baskets on top of the heads of some of the female members of the party.

These pilgrimages were for the impoverished people of this area the one time during the year when they would be able to leave behind the daily hardship and work of their native villages and towns. It was a time of great joy and festivity, families and neighbors uniting in preparations for the journey. Young people would often make the pilgrimage in hopes of finding a spouse, the girls especially praying for a good husband. These pilgrimages were one of the very rare opportunities in those years for the young boys and girls of the Cilento to actually interact.

When the pilgrims would arrive close to the summit of Monte Gelbison and Our Lady’s sanctuary, they would encounter the stone Cross of Rofrano, a monument indicating that they were very close to the shrine of their most beloved Madonna. At the Cross of Rofrano, the pilgrim groups would circle three times, leaving at the foot of the cross stones they had gathered along their pilgrimage routes. Passing the cross they would soon come to the doors of the church, and after another series of rituals, by tradition the youngest member of the party would enter first, followed in order by the musicians playing the zampogna and organetto, the banner carrier, the women with their cinte followed by the rest of the group. In the shrine’s piazza the pilgrims would break into song and dance celebrating the joy of being in a place where they felt so close to their celestial Mother.

Love for the Madonna of Sacro Monte was carried to the United States by Cilentano immigrants who arrived in the United States at the turn of the last century. In Jersey City, where many of them settled, an annual devotion was started, celebrated at Holy Rosary Church every May where a statue of “Maronna ru Monte” would be carried in procession. In the late 1960s, the devotees from Jersey City moved their celebration to Holy Face Monastery in Clifton, New Jersey. At the Monastery, they constructed a stunning outdoor shrine to the Madonna and brought a small statue for veneration.

The annual celebration at Holy Face Monastery ended in 1980. It was revived in 2012 by Cilentani and their descendants in New Jersey inspired by what they perceive to be a number of miraculous events which they felt were a very clear indication that Heaven wished this devotion in New Jersey to be not only revived, but to spread and flourish.

For more information on Our Lady of Sacro Monte of Novi Velia, visit www.madonnadelsacromonteusa.com. 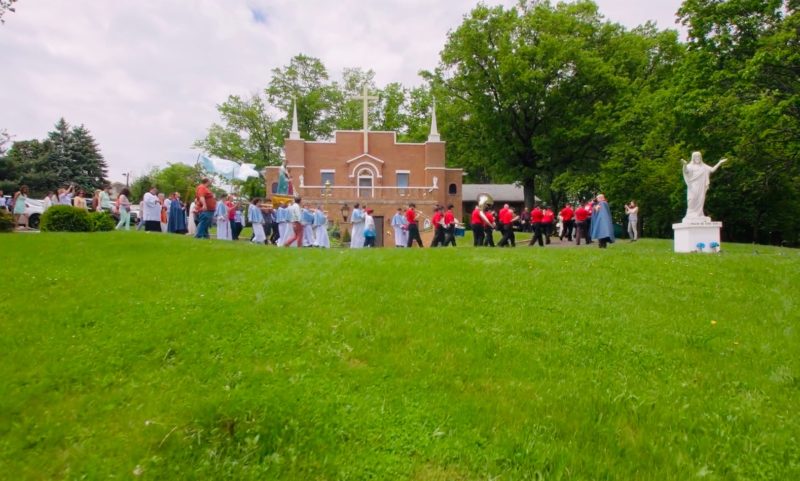