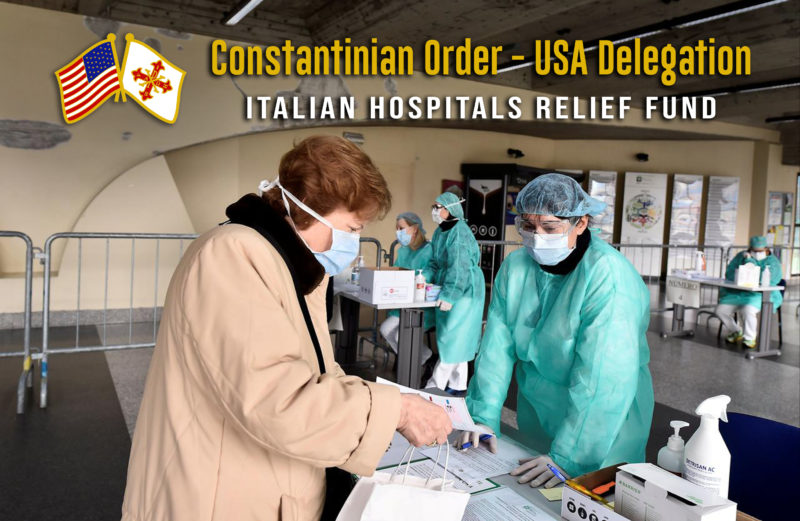 The United States Delegation of the Sacred Military Constantinian Order of Saint George recently announced its full participation in fundraising efforts by the Constantinian Order Charity Onlus to assist Southern Italian hospitals to fully minister to the needs of those affected by COVID-19.

“The COVID-19 crisis shows us that we are part of a worldwide community that is not restricted by geographic or national boundaries,” said John M. Viola, the royal delegate for the United States Delegation of the Sacred Military Constantinian Order of Saint George. “By undertaking this fundraiser, we are hoping to help hospitals in regions where financial assistance is not readily available. No matter where we are located, we are all fighting this pandemic— we want to save as many lives as possible, wherever we can.”

The non-profit of the Sacred Military Constantinian Order of Saint George, considered one of the most ancient dynastic orders of knighthood of the Catholic Church, was begun with the goal of public assistance and social solidarity, particularly through charitable works and hospital aid.

The Constantinian Order Charity’s fundraising efforts differ from current COVID-19 relief efforts in Italy as they support establishments and locales where the spread of this epidemic and a lack of intensive care equipment might have even more dramatic consequences. Italian regions supported by the Charity’s efforts include Abruzzo, Basilicata, Calabria, Campania, Molise, Puglia, and Sicily. Donations made to the Constantinian Order Charity will be distributed equally to hospitals in these regions with fewer resources who are in need of increasing their equipment and intensive care capacity.

“Every single euro donated will be a glimmer of hope and a small drop of life to win this challenge,” said Prince Carlo of Bourbon-Two Sicilies, the charity’s founder.

To date, the fundraiser has provided essential equipment to several hospitals in Southern Italy, including the Cotugno Hospital in Naples, which is notable due to the fact that none of its medical personnel have been affected by COVID-19 due to extreme sanitary measures put in place by hospital administration.

The United States Delegation of the Sacred Military Constantinian Order of Saint George is comprised of members throughout the United States. Headquartered in New York, the United States Delegation has spearheaded a Go Fund Me page to invite American Catholics, as well as Americans of Italian origin, to contribute to this cause. The Go Fund Me page can be accessed at this link: https://charity.gofundme.com/o/en/campaign/constantinian-order-us-delegation-italian-hospital-relief-fund