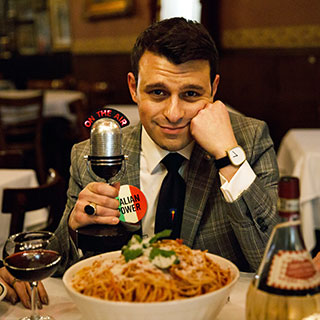 If around here we’re afflicted with a passion to celebrate our Italian American heritage, then John may be the sickest of us all—his professional and personal interests continuously land him in the world of Italian America. His appreciation for The Italian American Podcast goes back to his time as President and Chief Operating Officer of the National Italian American Foundation (NIAF), where he served with incomparable energy and passion from 2012-2018 as the youngest president in NIAF’s history. Under John, NIAF became the podcast’s first major sponsor, and in 2018, Anthony and Dolores eagerly welcomed him into the fold as a creative partner and visionary, who helped expand and invigorate the show’s platform with the addition of The Italian Power Hour. You can regularly hear him ... READ MOREsighing on air, trying to wrangle in the rest of us as our tireless moderator.

As the professional Italian American, John serves as co-vice president for New York City of the Italian Sons and Daughters of America (ISDA) and on the Boards of Directors of the National Italian American Sports Hall of Fame in Chicago, La Scuola d’Italia-Guglielmo Marconi in New York City, the Two Sicilies in America Foundation, and the American Initiative for Italian Culture (AIFIC) in Washington, DC. He was fundamental in the creation of Pope John Paul II Family Academy in Brooklyn, N.Y., serving as the Academy’s General Director, and the Director of the Madonna della Neve Foundation for many years before joining NIAF. Committed to living his passion for our history, he is a Knight of Merit with Star of the Sacred Military Constantinian Order of Saint George, one of the oldest Orders of knighthood in the world, and serves as the United States Delegate for the Constantinian Order and the other Chivalric Orders of the Royal House of Borbone of the Two Sicilies. He is also a Knight of the Order of Merit of Savoy, the Order of Saints Maurice and Lazarus, and the Equestrian Order of the Holy Sepulchre…so, yeah, he spends an inordinate amount of time wearing capes at High Mass. He used to have a sword, too, but it got lost in transit on a flight home from Palermo.

In his rare ventures away from things Italian, he serves as president of the Florida Panthers Foundation, enjoys reading, travelling, and forcing friends and loved ones into indulging his constant desire to sing karaoke. A native of Brooklyn, John traces his ancestry to the Vallo di Diano in the province of Salerno, Puglia, Basilicata, and his beloved Sicily.

Dolores manages to have an old and young soul at the same time. A New York native who has spent more than two decades working as a writer, editor, and speaker, she was the first call Anthony made when the idea of a podcast for Italian Americans popped into his mind. In many ways she’s the glue that holds our group together, from keeping our efforts on task and to schedule to regularly inviting the team to her home for home-cooked-meals that masquerade as business meetings.

In her professional life, Dolores serves as Director of Italian American Affairs for the Office of the Governor, State of New York. Having learned the ropes in podcasting with the success ... READ MOREof the original Italian American Podcast, she is now host of a second show, Bella Figura, The Tradition of Living Beautifully.

Always creating, she is currently at work on a novel, The Dreams that Break Your Heart, inspired by true events experienced by her Southern Italian ancestors. It’s a natural topic for her first novel, since from a very young age, she sat under kitchen tables, at the top of staircases, or anywhere else she could listen without drawing attention and relished the stories her family told in their loud and impassioned native Neapolitan. She is known for her focus on spirituality and all things intangible. When the conversation turns deep, it’s usually Dolores, guiding us down past the surface, toward things that are unseen, amorphous, and resonate.

She is a Dame in the Sacred Military Constantinian Order of Saint George, one of the oldest Orders of knighthood in the world, and serves as co-vice president for New York City of the Italian Sons and Daughters of America. She has attended Bread Loaf Writers’ Conference and the Millay Colony for the Arts, been Artist in Residence at Byrdcliffe Arts Colony, and is a scholarship recipient of the Norman Mailer Center. Previous to the Governor’s Office, she served as Senior Consultant at The National Italian American Foundation (NIAF) in Washington, DC, where, at the time, another one of our co-hosts was also employed. As our resident mystic, she might tell you it was meant to be. 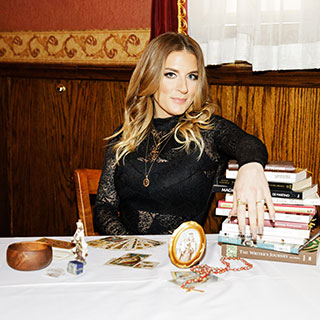 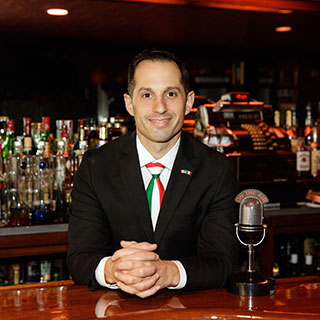 Anthony is the dad amongst us kids. The teacher at our boisterous preschool. The level-head amongst the wild. The subtlety surrounded by bombasity. He’s pretty much the insulin to our sugar. It’s no wonder, then, that Anthony was the one to think up this whole endeavor. A professional engineer by trade, whose alternate identity includes being a tireless entrepreneur, career coach, and trainer for engineers, Anthony has created several successful content brands and podcasts.  Besides the original Italian American Podcast, he is the creator of The Engineering Career Coach Podcast, which has been cited by Forbes and downloaded more than 2 million times. ... READ MORE

By the age of 35, Anthony grew tired of telling people that he was “Italian,” as if that broad description answered the question, “Where do you come from”?  So he dug deeper, and, like a good Italian boy, began regularly visiting his grandparents to ask questions about his ancestors.  This was the genesis of The Italian American Podcast and its mission of passing stories and traditions on to future generations.

Not one to rest on his laurels, Anthony decided to find his living relatives in Italy in 2016.  A husband and father of three, Anthony not only located relatives, but, in the free time we’re not sure how he manufactures, learned the Italian language.  He took his family to Italy for forty days to meet these relatives, and then, throwing a little more work onto his plate, wrote Forty Days in Italy Con La Mia Famiglia based on the experience.  While his calming voice and steady demeanor might often-times get drowned out in the gaggle of this group, he’s always there to bring us back to the point and keep us true to the show’s vision—one he’s had from the very beginning.

We’re not sure what sizzles more—Rossella’s personality or her marinara sauce.  The Brooklyn-born beauty is the bestselling author of Cooking with Nonna: Celebrate Food & Family With Over 100 Classic Recipes from Italian Grandmothers, and Cooking with Nonna: A Year of Italian Holidays: 130 Classic Holiday Recipes from Italian Grandmothers. A natural entertainer (she’s a member of the Screen Actors Guild, with parts in “The Thomas Crown Affair,” “Confessions of a Shopaholic,” “Gossip Girl” and “13 Going On 30” amongst her credits!), Rossella is host of the wildly popular online cooking show, Cooking with Nonna, which she created in 2009. ... READ MORE

Since its founding, the Cooking with Nonna empire has grown to include a rabid social media following, highly sought-after tours of Italy, and a bevy of branded products from culinary tools to t-shirts, all carefully designed or selected by Rossella and her Nonna Romana. Never one to back down from a challenge, she’s also the winner of the Food Network’s “24 Hour Restaurant Battle - Battle Italiano,” and in our opinion, God broke the mold when He made Ro.

Her deeply rooted heritage finds its source in Mola di Bari, a small fishing village commonly referred to simply as Mola, where her parents were born. If you’ve listened to even one episode featuring Rossella, you’ve heard of it.  She is fluent in both Italian and her ancestral regional language of Molese, and she has always been proud to represent her paese in all she does—including her victory as ‘Miss Mola USA’ in 2003, so we’re not kidding when we say she likes a challenge. 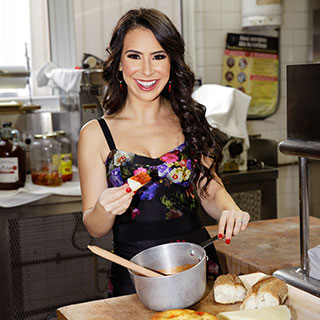 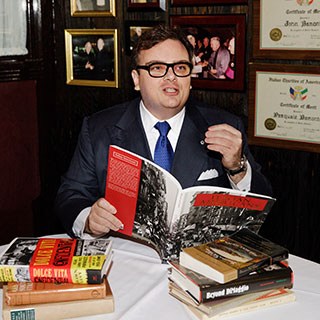 Pat was less than enthusiastic when it came to providing a bio for this website.  “What does anybody want to read about me for?” he was quoted as saying.  He doesn’t know we’re telling you this stuff, but Pat has a private law practice in his beloved home state of New Jersey and pursues his life’s passion of teaching as an adjunct professor in the Legal Studies Department at Montclair State University.  He’s pretty much a human encyclopedia, with a frightening knowledge of everything, from Catholic canon law to varietals of fig trees to the chemical process required to make the perfect loaf of Italian bread and the etymology of the different names for terra cotta pots used in the South of Italy. He’s our knowledge dropper. The wizard of our world. The Brain to our Pinky. The Professor to our Gilligan. ... READ MORE

Pat’s pretty much good at all things traditionally Italian American. He’s a member of the Salerno Food Fundamentalist Circle, so he has reverse engineered countless recipes of Southern Italian cuisine from Roman times to today. He is the Vice-President for New Jersey of the Italian Sons and Daughters of America (ISDA) and President and Prior of the Congregazione Maria Ss. Del Sacro Monte di Novi Velia Salerno di Jersey City, NJ (try saying that five times fast), a member of the Boards of the Italian Cultural Foundation at Casa Belvedere and the Coccia Foundation for the Italian Experience in America, a Founding Board Member of the Sandumanghesi Del Cilento Society, the former New Jersey Area Coordinator and Member of the Youth Activities Board and Young Professionals Council of NIAF, and the Past National Youth Committee Chairman of Unico National, the nation’s largest Italian American service organization. He is also a Knight of the Order of Merit of Savoy, the Equestrian Order of the Holy Sepulchre, and a Knight Official of the Sacred Military Constantinian Order of Saint George and the Order’s Vice-Delegate for the United States.