Arthur Avenue in the Bronx… 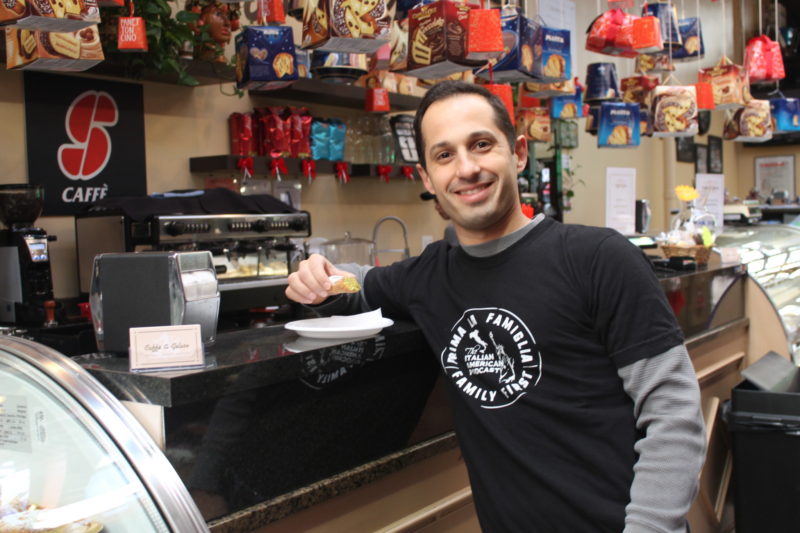 As I arrived on Arthur Avenue in the Bronx, NY, also known as Little Italy in the Bronx or the Belmont section of the Bronx, I got that feeling that I was home.  Dolores and I had arranged to visit with David Greco of Mike’s Deli for an upcoming holiday podcast episode and learn about this special neighborhood, which is still unknown by many Italian-Americans. The audio and video footage from our trip will be released on our Christmas Day episode this year, but please don’t wait until then to visit this gem of a neighborhood.

Dolores and I both recalled fond memories of visiting Arthur Avenue with our families when we were younger; Dolores probably more than me, but I do remember eating in a small restaurant there with my family and enjoying pork chops with peppers (Minghia! those peppers) and some of the best Italian sausage I have ever eaten.

If you’ve never been to Arthur Avenue, it really is in some ways a time capsule that contains a glimpse of the old Italian neighborhoods that were developed by our ancestors.  The neighborhood is filled with establishments that offer fine Italian-American foods, dining, housewares and other goods.

The Arthur Avenue Bronx website lists some of the notables born and raised in the Bronx, which include actor Chazz Palminteri, author Don DiLillo and rock star Dion DiMucci, whose group, Dion and the Belmonts, is named after a local street (Belmont Avenue).  Joe Pesci began his acting career after being discovered by Robert DeNiro at a local neighborhood restaurant, where Pesci worked as the maitre’d.

Yes, you should go and visit Arthur Avenue, especially during the holidays.  Yes, you will be able to get any kind of specialty Italian food that you would like.  But more importantly you will get to experience what many of our immigrants ancestors experienced as they tried to stick together with their fellow Italians and re-create the close-knit, small village experience that so many Italian-Americans have never gotten to experience.

Some parts of the experience that stood out for me include:

Our Christmas Day podcast episode will feature some amazing sights and sounds from Arthur Avenue, including a stint with me behind the counter at Mike’s Deli, but in the meantime, I urge you to experience it for yourself.

A visit can bring you back to your Italian roots, whether you have been there before or not.  So load your family into the car early one day during this holiday season and take a ride into the rich past of Italian-American history that is the Belmont section of the Bronx.

And don’t forget to grab an espresso and a cannoli while you there….

Previous Post: « IAP 28: From an Italian immigrant neighborhood to the White House, a conversation with Anita Bevacqua McBride
Next Post: IAP 29: This isn’t your granddaddy’s accordion! Cory Pesaturo on making the accordion cool again and the value of hard work »