So, for this Italian American kid, no day felt more alien than St. Patrick’s Day, when my freckled, fair-skinned classmates dressed in Kelly green and proudly presented lumpy, drywall-like soda breads their mothers made. I survived that only because two days later I would have a celebration of my own. 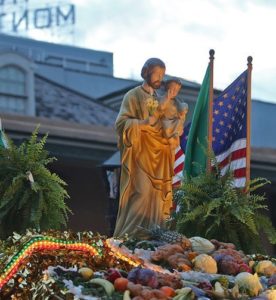 St. Joseph’s Day means a great deal to Southern Italians, and particularly to those from Sicily, where St. Joseph has been a patron for centuries. It’s said that in medieval times the humble carpenter answered the prayers of the Sicilian people and brought rains to end a drought that had devastated the island’s food supplies. Giving thanks, Sicilians began celebrating St. Joseph’s feast day by breaking with Lenten austerity and building gigantic altars weighed down with a rare abundance of sweets, breads, special foods and symbolic fixings like lemons and fava beans—all served as the center of celebratory visits with family and friends.

These traditions made their way to our shores with millions of Southern Italian immigrants. My family, in our Irish American exile, relished the opportunity to dress in red and celebrate with a family dinner, savoring the once-a-year delight of indulging in the famous St. Joseph’s zeppole.

Years later, it seems like many of my great Italian American adventures begin with a phone call from my friend David Greco, the famed Arthur Avenue chef and food historian. My relationship with the Sicilian American community in New Orleans, sharing its incredible celebration of St. Joseph’s Day, is no different. In the wake of Hurricane Katrina, David had been approached by his friend, Emmy award-winning actor and proud Sicilian American Michael Badalucco, who was looking to help the devastated city of New Orleans rebuild one of its most important traditions—the St. Joseph’s Parade.

New Orleans is a special city, and even more so to the Italian American community as the destination of some of the earliest immigration of Italians to the United States. Over the past century, the town has become increasingly and proudly Sicilian. 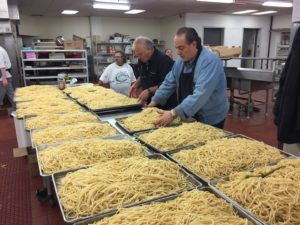 For the past 50 years, the Italian American Marching Club, one of the largest ethnic organizations in the southeastern United States, has grown its St. Joseph’s Day celebration into one of the signature events in the Crescent City. But the aftermath of Katrina jeopardized the three days of festivities. To make sure this tradition wasn’t lost, Michael and David began working with the Sicilian Americans of New Orleans. When David learned the festival kick-off lunch would be serving 2,500 Sicilian American guests spaghetti and the world’s largest (in his opinion, driest) meatball, he saw a problem he could solve. To David, the novelty-sized polpetta ran counter to the traditional Southern Italian Lenten abstinences, as well as the wealth of the Sicilian culinary arts. So, at his personal expense, David drove from the Bronx to New Orleans, and, instead of the spaghetti and meatball, cooked 500 pounds of pasta con le sarde, a traditional Sicilian St. Joseph’s dish.

While I’ve helped David with personal donations toward this feast, each year he begged me to come along on this once-in-a-lifetime adventure. Two years into my time at NIAF, I found the opportunity to join him.

A little before 5 a.m., the morning before St. Joseph’s Day, I stumbled bleary-eyed into the cavernous catering kitchens of the Hilton New Orleans Riverside to assist as David’s sous-chef in what would end up being one of the most impressive and enjoyable culinary experiences of my life.

I’ve always known David to be a man of boundless energy, but nothing proved that more than finding him lining up ingredients and singing orders to the kitchen staff as he began making, from scratch, with a lot of love, 500 pounds of pasta con le sarde. To make that much food, no pots or pans suffice. The gigantic machine for cooking the sauce looked more like an industrial trough than any kitchen equipment I’d ever seen.

In short order, the kitchen was swimming with intoxicating aromas of wild fennel greens, onions, salted sardines, raisins, pignoli nuts, and countless spices—delicately blending the scents and flavors of the many cultures that, over centuries, have left their mark on the Sicilian palette.

As the sauce cooked, David worked with the team to parboil 500 pounds of fresh spaghetti he donated from Arthur Avenue. Like a military commander in his precision, when one of the kitchen staff left his post and the pasta is supposed to be blanched, David flies into a tornado of activity to do it himself. Only someone who reveres our culture would worry about making sure 500 pounds of pasta is cooked perfectly al dente!

We worked all morning. At noon, we hoisted to our shoulders dozens of trays of pasta to serve the waiting masses. All are beautifully sauced and hand-charred by David. He has a theory about how the special Sicilian bread-crumb mixture, mudiga, needs to be toasted to bring out the flavors. The extra care is warranted: The 50 giant Ziploc bags of mudiga David is using come from one of the Sicilian nonne of the Marching Club, who makes the mixture from a secret family recipe for this moment every year to ensure the dish’s authenticity.

As we entered the ballroom, the sea of red shirts and jackets, tricolored beads and trimmings, transports me back to how small I used to feel when my family and I were the only people proudly celebrating St. Joseph’s Day. Here, it feels like all of New Orleans is anxiously awaiting the main course. I’m regaled by the jazzy notes of my favorite numbers by Louis Prima, a proud son of New Orleans whose songs and passion are kept alive by his daughter, Lena Prima. A talented musician and passionate member of the Big Easy’s Sicilian community, Lena and her band are playing “C’è la luna” as we plate the delicacy. 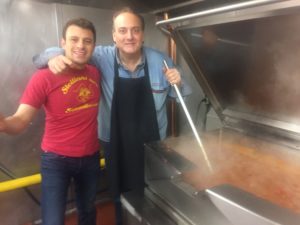 With the line of eager Italian Americans wrapping around the room, we hand out heaping portions of pasta and plastic cups of red wine. Celebrating its patron saint, the entire community is together, eating and drinking, singing and dancing. After I join Lena onstage for an impromptu “That Old Black Magic,” I’m completely welcomed into the Sicilian community of New Orleans as one of its own. By the time my head hits the pillow that night, I could only imagine what lay ahead on St. Joseph’s Day itself.

Many Italian American families and predominantly Italian American churches still put together St. Joseph’s altar tables welcoming visitors from all over New Orleans and surrounding towns. So, on St. Joseph’s Day, David, Michael, my new Marching Club friends and I went to St. Josephs’ Parish in Metairie, a New Orleans suburb with the area’s largest Sicilian American church. For days before the festa, families prepare their foods, plus baked traditional Sicilian cucidati fig cookies, to decorate the city’s largest altar.

That morning, thousands of guests line up around the block of the church to share a lunch of traditional Sicilian delicacies, many topped with mudiga, representing sawdust from St. Joseph’s carpentry. The table seems like a football field long, every square inch covered with treats sold to raise money for the church. Lunch is a multicourse affair of antipasti, pastas, fishes and sweets. By the end, I can’t imagine going further without a nap, but we’re carted back to the hotel to change for the main event.

The St. Joseph’s Day Parade is the heart of the celebrations. Members of the Marching Club, their families, celebrity Grand Marshalls and honored guests make their way, on foot or in floats, through the French Quarter in a multi-hour carnival of Italian American joy. Long-tenured club members have personalized chariots; men are not allowed in the parade without a black tuxedo!

As I straighten out my red-white-and-green bowtie and exit the hotel, I’m astounded by what seems to be an entire city bedecked in red, white and green. There are thousands of marchers, everyone in their tux, crisp and perfectly pressed, weighed down by the red, white, and green beads and buttons, and flowers and hats, that scream Italian pride. The young girls of the community, all dressed in beautiful white gowns and dainty gloves like it’s their first Holy Communion, are arranged in a hierarchy of Queens and Maidens for the Court of the Feast Day. They are one of the central attractions; everyone I meet shares a story about the honor of having a daughter or granddaughter serve as a Queen of the feast.

David and I take a seat in the back of an open convertible, our parade car. True to his nature, David takes out a bottle of wine and a plate of antipasto he vacuum sealed just for the day. “Why should we be hungry,” he asks, “just because we’re in a parade?”

Our trip through the Quarter is a red-white-and-green blur of Italian music, and people dancing in the street. Hundreds of thousands of spectators line the route, hands outstretched for the strings of the tricolor beads we toss from the car. Every few feet, we stop as someone runs into the street to hug a friend or plant a kiss on a family marching to keep their traditions alive.

When the pandemonium of the parade fades, we return to the hotel for the Gala Dinner. It feels like thousands of tables surround the dance floor where Marching Club members and honored guests are introduced, before the little girls, beaming with pride, are invited to the dance floor to dance with their fathers and grandfathers. When the ceremonies are finished, tarantellas breakout and, like one big family, people begin table hopping to share delicacies each has brought. 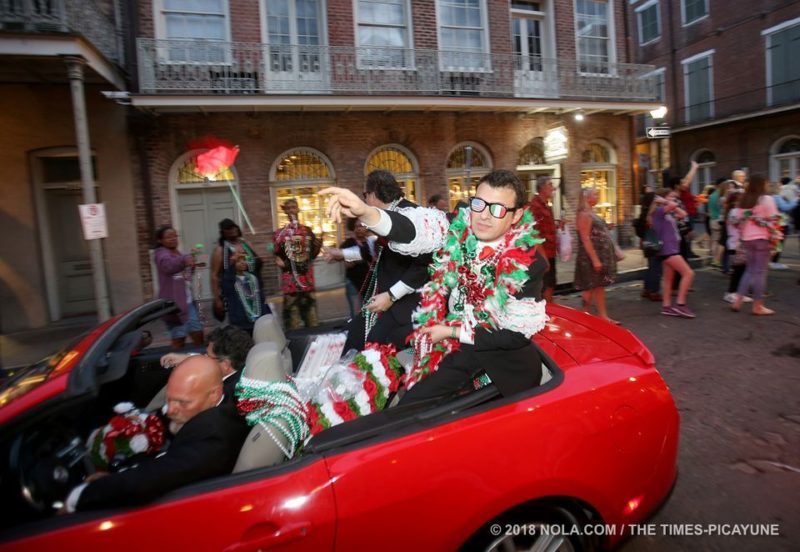 For me, the night ends in Chianti-induced haze of song and dance, twirling the red-white-and-green feathered boa a fellow marcher tied around my neck earlier.

As I look back on that first trip, I’m energized by how good I feel about New Orleans’ Sicilian American community and its unparalleled tradition. I go back every year now, bringing friends and family to share what I think might be the most special weekend of the Italian American calendar (with all respect to our NIAF Gala).

I tell anyone who cares about his or her heritage to visit New Orleans on March 19. If you’re Sicilian, Italian, or just a lover of good people and their proud culture, it’s an event you shouldn’t miss. And, if you make it to the Feast, look for David and me in the back of our convertible, and maybe join us for some antipasto and wine.

Published with permission of the National Italian American Foundation 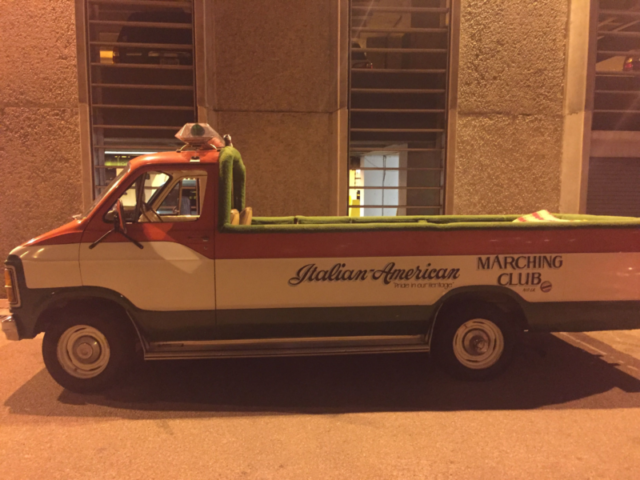 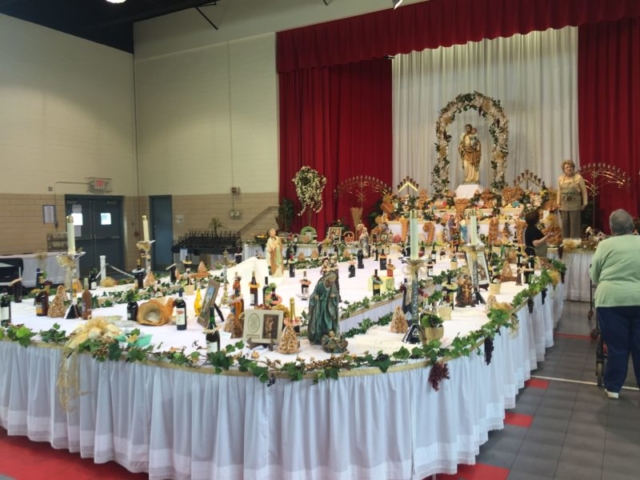 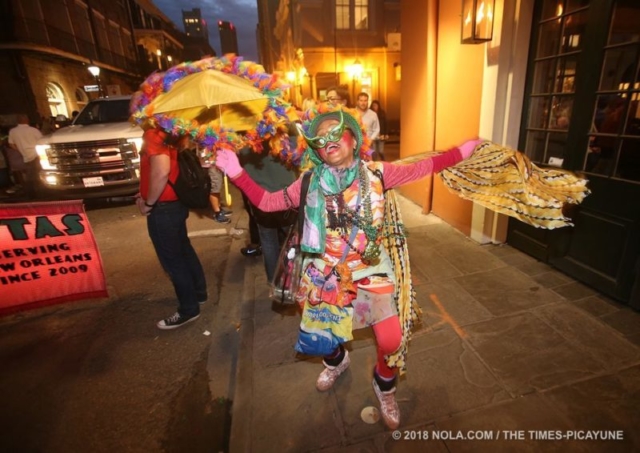 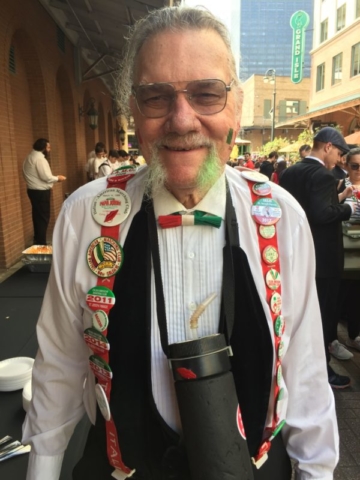 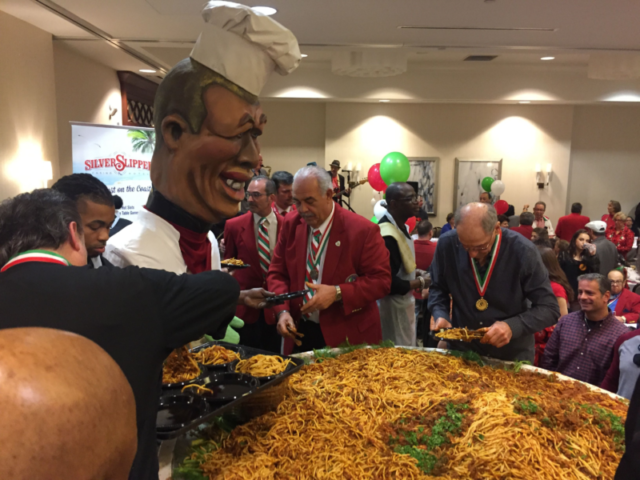 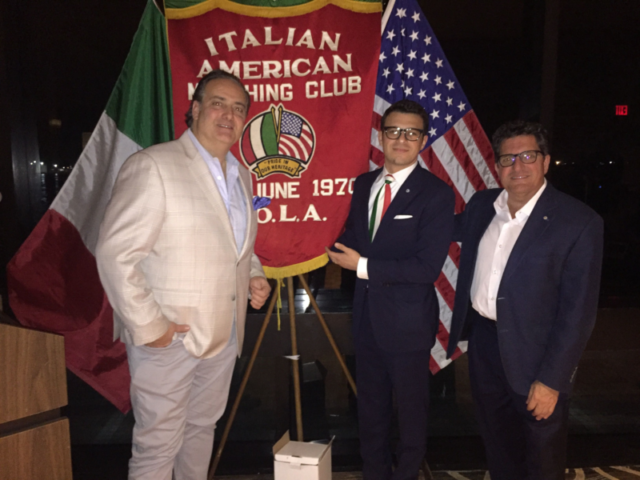 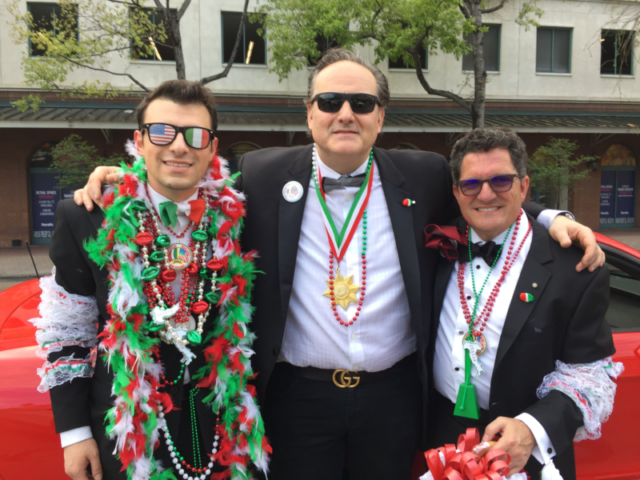 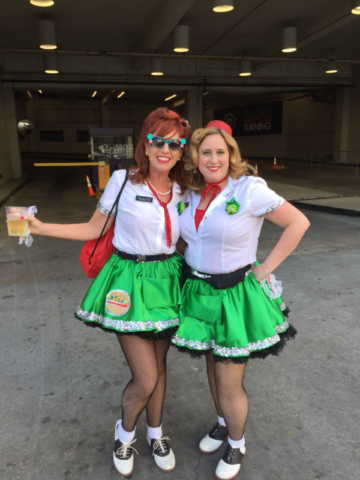 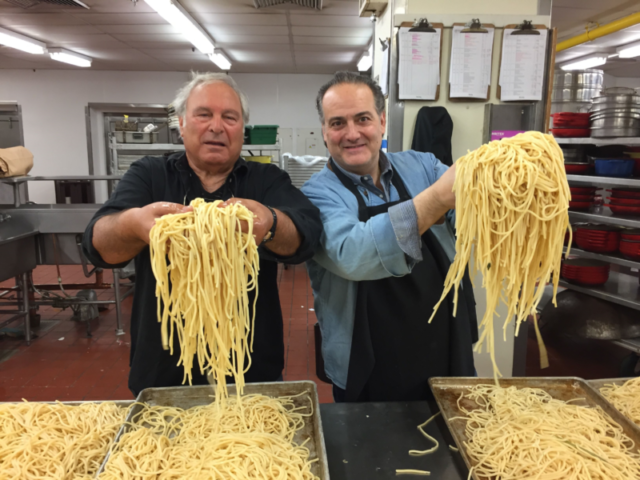 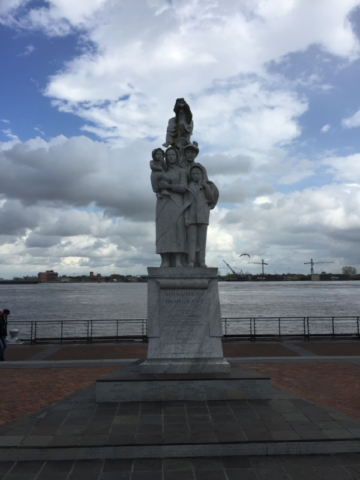 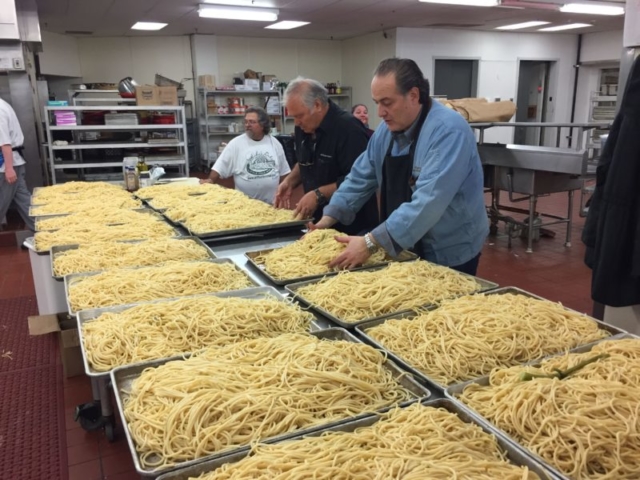 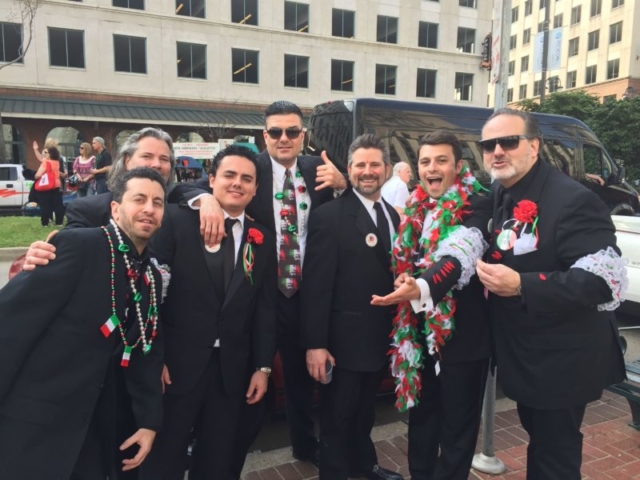