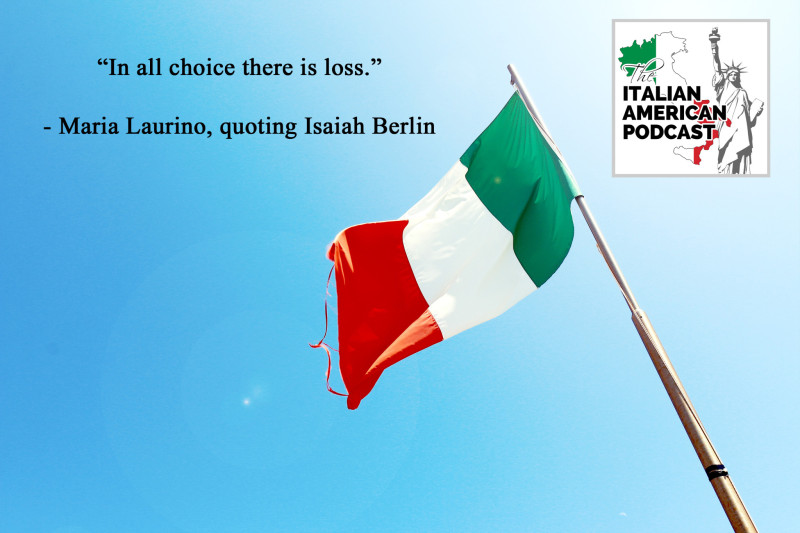 Lately, Anthony and I have been preoccupied with Roseto, Pennsylvania. Maybe it’s because we recently spent time with bestselling author Adriana Trigiani, who grew up in Roseto; or maybe because we recently spoke with Maria Laurino, author of “The Italian Americans,” the companion book to the popular PBS series of the same name, among other books. Our episode with Laurino airs on January 31st. Both are factors, of course, but I think it’s the tale itself, the parable that rests at the heart of Roseto’s rise and fall, which has really captured Anthony and me.

Roseto is a small town established at the turn of the 20th Century by Italian immigrants. These paesani built the community as a near replica of their Italian hometown, Roseto. Isolated by the larger population of Germans and Welsh, the Italians took care of one another, built homes, factories for the women to work in, schools for the children to attend, bakeries for the pane and panettone to be made in. Roseto stayed this way for generations.

In the 1960s, when heart disease was emerging as the number one killer in America, especially among men, medical researchers were desperate to study the disease to figure out what was going on. Researchers studied a mysterious occurrence in Roseto – the people were not dying from heart disease, and this despite the fact that they ate a high fat diet of pizza, pasta, and the like. This was curious, to say the least. The researchers even studied former Roseto residents who had left the community, and found that their rate of heart disease, on the contrary, was on par with the national average. There was something about Roseto, Pennsylvania, specifically.

“There was no suicide, no alcoholism, no drug addiction, and very little crime. They didn’t have anyone on welfare. Then [researchers] looked at peptic ulcers. [The Rosetans] didn’t have any of those either. These people were dying of old age. That’s it,” explained John Bruhn, a sociologist from Oklahoma who studied the town (from “Outliers” by Malcolm Gladwell).

After eliminating other possibilities, the researchers discovered what exactly saved the hearts of the Roseto population: la famiglia.

Through a structure of support and mutual aid that the rest of the country did not enjoy, the community the Rosetans lived within kept them healthy and strong.

In the great narrative of the Italian-American experience, families have been separated and rejoined again and again. My own parents, for instance, were separated from their families when they emigrated from Italy to New York in the late 1960s. It’s an old story. Yet, somehow, it seems the modern version we live with today, where siblings live in separate states because they are forced to move to find work, to find homes they can afford, or simply because they want to, or children leave for college – all the things America gives and encourages in us – seems more isolated and disconnected than the once upon a time stories of familial separation. Maybe because this is exactly what the original immigrants emigrated to avoid. Maybe it’s because this is what they sacrificed their homeland for: So their descendants would be able to live joyfully together, to prosper and enjoy the fruits of that prosperity together. It seems a strange mutation of our ancestors’ sacrifices – that we should then live apart from one another, sick, separate, stoic, and anxious.

When families were distanced during hard times because of immigration, those Italian communities were recreated in Little Italys across the country. My own mother talks of arriving in Queens, New York, and feeling as though she’d never even left Southern Italy. Everyone spoke Italian. Everyone behaved Italian. The Old World was here, transposed upon the new. What a community to live within.

We children of these immigrants and their descendants have no such luxury. We light out into the world, Italians, Americans, tied to our families, yet also taunted by the promises of American freedom, and, in so doing, in leaving our hometowns, our childhood homes, our nuclear families, we immigrate into the larger issues that plague Americans overall – depression, anxiety, pill popping, loneliness.

And this, of course, is how the story of Roseto ends. Siblings eventually came to move to separate states, people moved to find work (as with Trigiani’s family, which moved to Virginia, the famed setting of her Big Stone Gap series), children, wanting more than small town life, left for college, or simply because they wanted to, enticed by the American lure of more and bigger, bigger and better.

This is the moral that rests at the heart of Roseto: Personal independence is gained at a cost. Achievement is gained at the expense of life among the tribe. We trade the richness of family, faith, and community, which heal and strengthen, for the shiny objects of success.

In our upcoming episode with author Maria Laurino, we talk about the losses we have experienced as a people in these later generations. Feminism, the thirst for accomplishment, independence, autonomy – all the flashing lights of American life – at what cost have we attained them?

Considering this is the responsibility of our generation. To take the lesson of Roseto and find a way to refashion the community that once saved our lives – spiritually and physically, emotionally and literally – that is our responsibility as modern Italian Americans. How much of the Old World is the American Dream worth? It is a question we explore in our next episode, and one we will continue to explore, along with you, of course.

Previous Post: « IAP 07: Adriana Trigiani on Italy, Ego Versus Heart and Why Understanding Your Past is Important – Part 2 of 2
Next Post: IAP 08: Were You Always an Italian? Maria Laurino on History, Identity, and Stereotypes »