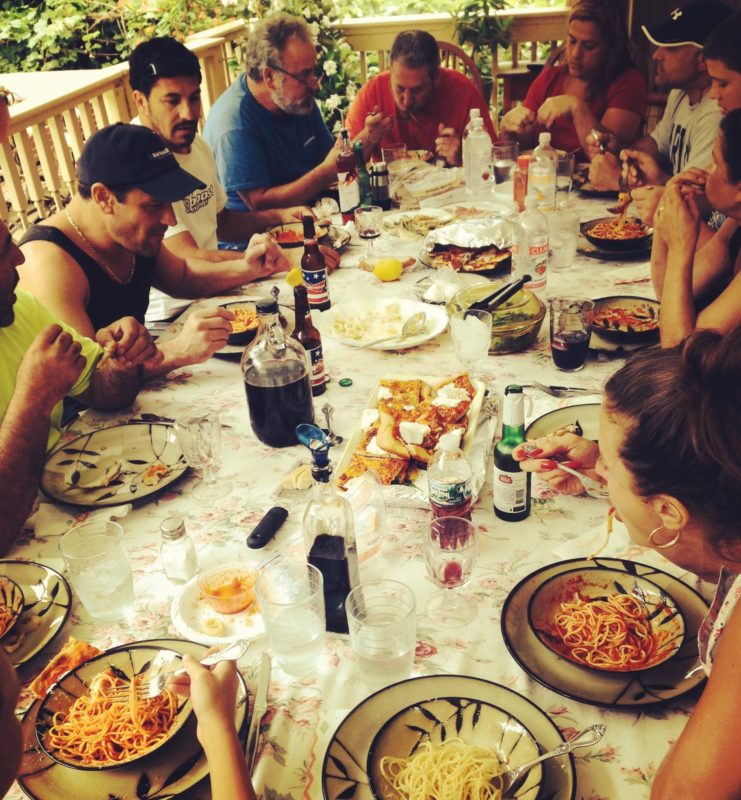 In the series, “The Italian Americans,” written and directed by John Maggio, The Italian American Podcast’s guest for Episode 24, there is a scene where author Pete Hamill, discussing the incredible importance of community and la famiglia among Italian Americans, talks about young men he knew in the 1950’s in Brooklyn, who were talented and smart, but never left the neighborhood to pursue expansive careers.  Their strong ties to their families, Hamill insinuates, being the reason.

A generation or two later, we see what happens when the sons of these young men do, indeed, leave the neighborhood: Italian Americans became successful beyond the dreams of our ancestors, sitting on the U.S. Supreme Court and in the Senate, becoming titans of finance and industry, artists and performers, chefs, and movie and television personalities.

Once we ventured out of the neighborhood and into America, we proved unstoppable.

As with most success stories, there’s a flip side.  Like the mothers, fathers, sisters, and brothers left behind when our ancestors fled their Southern Italian villages, this generation must deal with the impact of the mass departure from Italian-American enclaves – what it does to a family, a town, and a culture. We are the ones who understand that with success comes incredible loss – the dissolution of community, and the loss of solidarity, Sunday dinner, and the irreplaceable bonds that come from being around your own people.

I’m thinking about all of this for two reasons – one, Anthony and I have decided to launch a new initiative, “The New Neighborhood, a place for Italian Americans,” which I’ll talk about more in a minute; and two, because after a year and a half of living away from home, I am moving back.

While several factors led to the decision to move home, I find myself surprised at the part of me that is a little sad to leave where I currently am.  I’d just started to build a life here, complete with friends, a great apartment, good job opportunities, contacts, connections, and the like.  But the opportunity arose to return to New York, where my family, my roots, and my community is.  So, I’m going to take it.

I saw my family very often while living away, but still, I missed things.  Every day and spontaneous things.  Our Family Night dinners at my mother’s house.  Sunday dinner at my aunt’s.  Stopping by a family-friend’s house to help make soppressata. Having coffee with my cousin.  Going to Mass with my mother.  Seeing my 25-year-old goddaughter when she’s in town visiting her father.  Seeing my 3-year-old godson on his birthday.

The sacrifices my parents made created a world for me wherein I can find opportunity nearly anywhere.  I’ve accomplished enough and have a level of success that allows me the freedom to choose being home over being away.  Perhaps I am relinquishing some good opportunities by leaving the current city I live in.  Perhaps I am turning down some access to wealth and influence, or maybe not, but I’ve decided the risk is worth it to be home, where I belong, with my people.

I believe the responsibility of this current Italian-American generation is to return to the neighborhood, in some fashion.  Maybe not the old neighborhood, which of course has likely changed beyond recognition, but a new neighborhood, one where the very success we’ve achieved allows us to make decisions where, as we did once upon a time, we put family and community first.

For instance, I have a wealthy friend who has talked more than once about his family looking to purchase homes side by side, on the same lot, creating a small neighborhood of their own.  That is a terrific example of using our American success to actualize our Italian-American values.  He’s not talking about his family members each buying sprawling mansions wherever they each individually want to, paying no mind to where the rest of the family is.  They are talking about using that success to return to one another.  Prima la famiglia.

Most of us are not that wealthy, and as such, of course, don’t have that luxury.  But our ancestors weren’t wealthy, either; they made decisions to be near one another.  Where else would you live, for God’s sake, was their mentality, than near your siblings and parents?  I would rather live in the sun and ocean of Southern California than the snow and concrete of New York, but California is not my home, and my community is not there.  Yet I know peers who have made that choice, raising their children a five-hour plane ride from their families for no other real reason than the adventure of it; everyone must dictate their own lives, and it’s not for me to judge, but for me, personally, that is a very puzzling choice to make.

What I’m saying is maybe it’s time to recognize that our ancestors sacrificed not only so we could have nice lives with more things, but so that we could have nice lives and things and be together.  The generation before us was so focused on that first part, understandably so, that they overlooked the second.  In the hierarchy of needs, we’ve attained the material; perhaps it’s time to consider the spiritual.  Maybe our generation is the generation tasked with bringing back the together.  Maybe our sacrifice is to do the work of reuniting our community.

Our most recent guest, Rossella Rago, host of “Cooking With Nonna” and a young woman in her late 20s, is a perfect exemplar of my point.  Her parents, like many Italian immigrants, wanted more and bigger.  Yet Rossella wanted nonna and the Italian enclave of Bensonhurst, Brooklyn, where she was raised and where she felt she belonged.  When her parents moved to the suburbs of Jersey, Rossella continued to spend her weekends in Brooklyn, until she finally moved back there at the age of 18.

I so admire Rossella for this.  Although I was very interested in my heritage even as a little girl and fiercely proud of it, as a young woman, I was also very influenced by American values of freedom, independence, and women being “unrestricted” from traditional roles and their families’ dominance.  The first chance I got, I left.  I went to the other side of the country, where, after barely a month of being there, I found myself sobbing on the phone with my mother, telling her, of course, how absolutely homesick I was.

One thing Rossella’s career path demonstrates (as well as the paths Anthony and I and many other young people of our generation are currently taking) is how technology can make this reuniting possible.  Rossella didn’t need to move to California to create a popular and successful cooking series.  With the use of technology, she’s able to build her empire from her home, producing, marketing, and disseminating her product right where she was raised.  For many of us these days, we can bring work to us, where we choose to be, as opposed to having to go out and get it.  We can pursue our dreams without leaving our families.  I understand that’s still a luxury for some people, but it is undoubtedly a powerful tool in helping to modernize and recreate the communities we’ve lost.

I don’t regret wanting my independence, but from my current vantage point (which is admittedly always 20/20), I wonder how much it matters, really.  Were the independence and adventure of the three years I lived away from my family in Little Rock, Arkansas, for instance, worth the fact that, unbeknownst to us, they were also the last three years of my father’s time here on earth?  The answer, I can tell you, is no, it was not worth it; in the end, I will always regret not having been closer to him, able to drop by for dinner unannounced; able to play scoba with him at the kitchen table on a random autumn afternoon; or drink a few glasses of homemade wine on the back porch on a summer Saturday evening.  All those fleeting opportunities the distance between us made impossible.  And for what?  To be meeting people I no longer speak to and living a life I no longer live?  That experience has come and gone; my ties to my family remain.

It is brave to light out on your own, especially when you’re doing it as my parents did, to change your family’s destiny and support yourself.  But for many of us today, the decision to do this is less heroic, and more….about fun, about “doing you,” as the current popular phrase goes.

From the letters and comments Anthony and I receive from all of you, we know this loss of community is an enormous absence in your lives.  Which is why we’re creating our latest initiative, “The New Neighborhood, a place for Italian Americans,” an online, closed group (accessible to members only for a nominal yearly fee) where you can connect with other Italian Americans in real time, talk about traditions, keep them alive, and connect via the pride in your heritage.  We don’t want this space to remain online.  We want it to simply be a jumping off point from where true, deep bonds can be forged.

We want you, in this neighborhood, to find mentors for your children and friends for yourself.  We plan to have guests conduct live talks and Q&A sessions on topics from genealogy to cooking to travel.  Would you like to bake some zeppoles for St. Joseph’s Day, a classic Italian American tradition, along with my mother and me?  In the New Neighborhood, we’ll send you a shopping list of the items you’ll need beforehand, and then we can all bake together live, sharing comments and questions back and forth.  I know it can’t replace the days when you were in the kitchen with nonna and your aunts, but it is a start, and perhaps the next best thing.  We will also plan outings and gatherings at traditional Italian-American spots like the Bronx’s Arthur Avenue, where we can eat together, drink some vino, and laugh and tell stories.  Like true Italians.

Paesani, send me your prayers for my move back home that it will all fall into place.  And if you’re interested in learning more about the new neighborhood, which will launch in early March, please connect with us via email at italianamericanpodcast.com/subscribe.

Previous Post: « IAP 33: Rossella Rago on Cooking with Nonna and passing down traditions
Next Post: IAP 34: Dual citizenship and exploring your roots with Laura Lee »